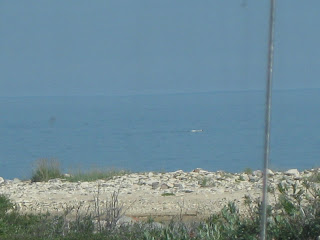 Everyday in the arctic is an adventure. Today began with a 7 am breakfast as usual and then we all proceeded with our normal morning schedule, leaving for Polar Bear Alley (the site of testing for the day) at around 8:40 am. After collecting samples and data from the first 3 ponds, we were suddenly interupted by a thought to be distant polar bear off the shore.

Discussion about the white dot led to confirmation that it was indeed moving and that it had a black nose; it was definatly a polar bear! The bear was far enough away for us to have time to pack up our supplies at the 3rd pond site, but the last few data points were not taken. We had time to stand outside the van and take a look at the polar bear through binoculars and take some pictures with our cameras. While some people tried to take pictures through the binoculars, the bear was too far away to get a good clear picture of it.

After driving back to the research center and eating a delicious lunch (of the selection,grilled cheese sandwiches which are my favorite) we set back out the collect data from 4 more ponds in Polar Bear Alley. The bear was not spotted again and the rest of the data was collected without any interference.

Most of us are getting the hang of walking in the ponds and luckly no one was sucked down to their hips. Although, I had a nice little fall that filled my waders with water and a few people had some stumbles.

I am looking forward to the lecture on polar bears tonight after dinner as I know my fellow earthwatchers are too. I'm glad we had a glimpse of a polar bear before the talk and I hope that we have the chance to see another one at a closer (and safe) distance. We are also hoping to see the aurora borealis later tonight if it isn't too cloudy!