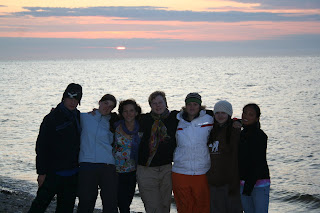 Sunset at the end of a great day off! 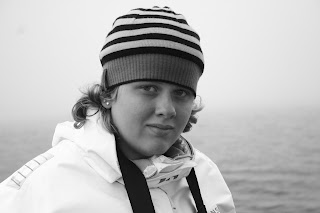 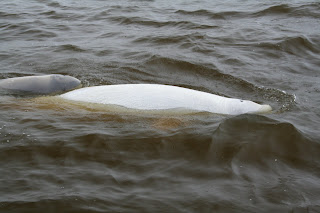 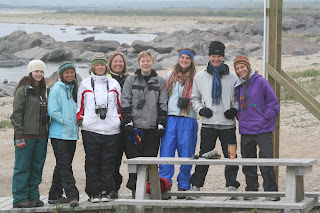 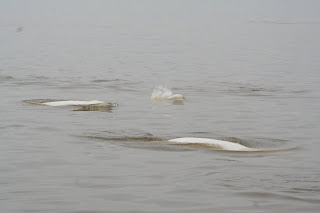 Today, Saturday the 25th, marks the completion of an entire week in Churchill. In some respects, it seems as though we’ve been collecting data and listening to frog audio for months, while in other terms, it feels like we only arrived from Winnipeg yesterday. Despite the contrast between these perspectives, none of us “earthwatchers” (teen and leader alike), can deny that this has been an incredibly fulfilling week--fascinating field data, exhausting treks through knee deep mud, and countless inside jokes and “great stories”. In other words, we’ve had a very full and genuinely tiring week, and finally, today we had a well deserved day off.
Even though the heavy rain put a damper on the early morning and convinced most of us that our whale watching adventure would be postponed, by 8:15 we were pleasantly surprised and ready to set off for Churchill town. We drove along the twists of gravel road and past numerous orange lichen rocks, until ultimately, we reached the base of the Sea North whale watching tours (www.seanorthtours.com). After a brief overview of safety and background on whale species, our tour began. We meandered into mouth of Hudson River, eager to see our first Beluga. At first, escaping birds seemed to provide most entertainment, but eventually we slowed down and were truly surrounded by these incredible whales. Like most overenthusiastic tourists, our entire group became “trigger happy” and snapped away memory cards full of tail shots. Of course, Raffi’s “Baby Beluga in the deep blue sea...” soon became our theme song as we watched splotchy grey less-than-week-old calfs swimming alongside their majestic mothers. It was truly amazing to witness the beauty of 8 white figures arching their spines in unison along foggy horizon, and I think I speak for everyone in saying how grateful we are for this experience.
Soon after, our tour ventured to Prince of Wales Fort on a nearby peninsula. After hearing detailed historical context and specifics on use of the interior, we walked around and snapped photos of ancient engravings, cannons and the misty view from highest point of fort. Upon our return to Churchill we headed off to the famous “Gypsy's”. As delicious as food at CNSC is, it was very satisfying to eat pizza, etc in a different setting. Also, the vast array of dessert pastry options was overwhelming, and after sampling quite a few, I can attest that they were utterly scrumptious.
Next, we drove to the Eskimo museum—an incredible collection of carvings and artifacts from the northernmost region. Personally, Eskimo heritage and culture is not a topic I’m very knowledgeable about, so I was very fascinated by the intricate whalebone figurines that portray so much about native lifestyle. I was also impressed by the detailed stories that accompany each carving, particularly one featuring a young Eskimo boy first witnessing flight of an airplane. I found it intriguing how well this small walrus tusk figurine could capture the stark clash between traditional Eskimo way of life and modern technological development.
After tooling around museum gift shop, a general store souvenir shop, and the local grocery store, we set off for the CNSC. However, our journey back was not so direct, as the incredible sunshine seemed to prevent our immediate return. It was genuinely our first taste of arctic sunshine all week, and the invigoration from the rays made a roadside photo/run and jump around enjoying nature stop completely necessary. Despite massive quantities of mosquitoes, we had a rather “glorious” little adventure that, at least for me, was extremely satisfying.
Eventually, we returned to the CNSC and grabbed an uneventful dinner. Upon finishing, Spencer, Anna, Little Leanne, two others from center, and I went for a very fast paced “jog”/bike (armed with firearms in case of polar bear attack of course) to the rocket and back. In our absence, the others enjoyed numerous rounds of Bananagrams, the “official” game of the trip. We then had very interesting discussion/lecture on plausible solutions to climate change ranging from immediate recycling and choosing healthy grass-fed meat on a local level, to the necessity of clean energy economies on a global scale. They dynamic structure of this conversation allowed us to explore numerous decisions on personal level regarding college and our futures, as well as see examples of current environmental efforts such as the Milwaukee Urban Ecology center, Environment Connecticut, and the Repower America Campaign.
Finally, we ended our adventurous and very “stage one”-esque day with an excursion to watch Arctic sunset over beach—a very fulfilling and fitting closure to an altogether quite satisfying day.
Posted by LeeAnn at 9:55 AM